Review: Recording of Pietro Vinci's Sonetti Spirituale that Sarah Mead’s ensemble, Nota Bene, made at Harlan Chapel a year ago

“Viol consort Nota Bene and the quintet of singers whom they accompany have unearthed here a Renaissance gem, apparently its first recording. ...Overall this is a worthwhile excursion into a little known but stimulating corner of late Renaissance repertoire. Fans of this genre will find their investigations here amply rewarded.”

“The concert, one of a series funded in part by the Brandeis Arts Council and the Mandel Center for Humanities, was part of an exploration that began with a collaboration with Ramie Targoff during the 2013 meeting of the New England Renaissance Conference.

From its inception, this project (which included a week's campus residency capped with a multimedia performance in Slosberg) has been nurtured by Brandeis, culminating in the recording last summer on the Brandeis campus. In conjunction with that recording, my edition of the 28 madrigals was also published last summer, with thanks to the Brandeis library for helping me to obtain an excellent facsimile from Italy, and to Paola Servino of Romance Studies who was tremendously helpful, assisting me in communicating with the authorities in Italy.

The reviewer pays careful attention to the music and poetry, and has clearly captured the essence of what we had hoped to put across in our performance.”

The World Languages and Cultures committee has created a website dedicated to language learning at Brandeis. The site serves as a hub of information that ranges from information about the language requirement (the WLC requirement) to fellowships to extra-curricular/co-curricular opportunities to multilingual Brandeis. The WLC hopes this website will help promote language learning at Brandeis, become a valuable resource for students, and grow with more content over time.

Keziah is a sophomore Posse Scholar from Atlanta, GA studying Health, Science, Society, and Policy (HSSP). At Brandeis, she is in her second year studying Chinese and volunteers with the Waltham Group. In her free time, she enjoys spending time with friends, knitting, and learning about various cultures and languages.

For a message from Keziah, watch her video introduction.

For questions or more information, email Keziah Corbett or check out the Brandeis Language Learning Facebook and Instagram pages!

Celebrating the Class of 2020

We hope all students, faculty, and staff in the Division of Humanities enjoy their virtual mini-celebrations and we look forward to the in-person event in spring 2021.

Apply for the World Languages Fellowship

Are you passionate about learning language? A proficient social media user? Interested in promoting language learning at Brandeis?

The Mandel Center for the Humanities has announced the winners of the Mandel Faculty Grants in the Humanities, made possible by a generous gift from the Jack, Joseph, and Morton Mandel Foundation.

Call for Proposals: 2019-20 Mandel Faculty Grants in the Humanities

The Mandel Center for the Humanities is accepting applications for four Mandel Faculty Grants in the Humanities. Each of these grants of $5,000-10,000 will support a member of the Brandeis faculty in the humanities, creative arts, and humanistic social sciences, or creative arts. Priority given to projects firmly located in the humanities (broadly defined). To apply for a Mandel Faculty Grant, please send a proposal of no more than 1000 words, to Mangok Bol, mbol@brandeis.edu, by December 6, 2019.

Catherine J. L. Theobald, Assistant Professor of French and Francophone Studies, is the first recipient of the Canadian Society for Eighteenth Century Studies’s best essay prize for her article titled "Soaring Imaginations: The First Montgolfier Ballooning Spectacle at Versailles in Word and Image," which is to be published in Lumen, a highly respected journal. The 2020 issue’s theme is Wonder in the Eighteenth Century / L'Émerveillement au dix-huitième siècle. Please join us in congratulating Catherine on this wonderful honor.
Professor Emerita Susan Lanser wins the Wayne C. Booth Lifetime Achievement Award

The Executive Committee of the International Society for the Study of Narrative (ISSN), has announced that the winner of the 2020 Booth Lifetime Achievement Award is the eighteenth-century scholar and pioneering feminist narrative theorist, Susan S. Lanser. She will be receiving her award during the Awards Luncheon at the 2020 annual conference in New Orleans on March 7, and will be honored with a special panel devoted to her work and career. 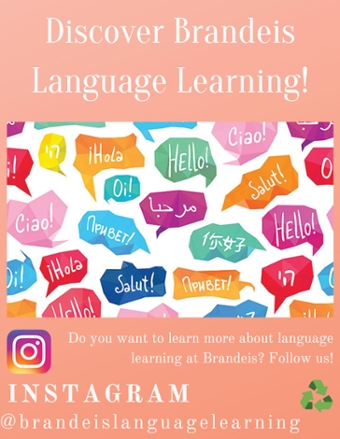 A message from Maddie:

I am a sophomore at Brandeis. Born and raised in Pittsburgh, PA, I am a double major in Anthropology and HSSP, while additionally pursuing Judaic Studies. Some of my many passions include Judaism, religion, prayer, writing, openly discussing mental health and illness, and (yes) language learning.

Prior to university, I studied Spanish for 10 years, Hebrew for 7 years, and Mandarin for 4 years. Since starting at Brandeis I have continued my Hebrew studies and began learning Arabic (Modern Standard).

As the new WLC fellow, I am not only hopefully a resource for students but also for instructors as well. To help in doing this, I would love to have any and all input or fun facts throughout my time as a fellow, from you all as instructors! I hope to create meaningful posts for everyone who chooses to follow the page. And I hope throughout the semester you all will communicate with me on what I can do to boost involvement and interest in the languages you all teach!

For questions or more information, email Maddie Herrup or check out the Brandeis Language Learning Facebook and Instagram pages!

Professor Harleen Singh was featured in Overlooked No More: Rani of Jhansi, India’s Warrior Queen Who Fought the British.

Recall This Book: A Podcast

Professors Elizabeth Ferry (Anthropology) and John Plotz (English) launched an interdisciplinary podcast called Recall this Book. The basic format is a 3-way conversation between folks in different disciplines who converge on an issue that they share in some way. More information can be found on the English Department’s Faculty Projects page or on the Recall This Book website.

Esther Brownsmith, NEJS PhD student, will be a Scholar in Residence at the Hadassah-Brandeis Institute for the 2020 spring semester. While in residence she will work on her project, “Inconspicuous Consumption: Conceptual Metaphors of Women as Food in the Dueteronomistic History.”

Congratulations to the winners of the Language Video Competition!

To see the video finalists in French and Francophone, Hispanic, and Italian Studies, check out the Brandeis Language Oscars page.

Yehudah Mirsky participated in a panel discussion at the UN Headquarters, “The Genocide Convention at 70: From Definition to Implementation” with the Raphael Lemkin Award for exemplary work in the fight against genocide recipient: Father Patrick Desbois. This event was organized by the Permanent Mission of Rwanda to the United Nations and the World Jewish Congress marking the 25th anniversary of the genocide against the Tutsi in Rwanda where more than 800,000 people were systematically killed, overwhelmingly Tutsi but also moderate Hutu, Twa and others. On this Day, we honor those who were murdered and reflect on the suffering of those who survived.

On March 10, 2019, all members of the Brandeis community were invited to "Let's Dance! International Evening of Dance" that featured performances by various campus dance groups, brief dance lessons, international dance music, and various languages studied and spoken at Brandeis.

Kara is a second-year Brandeis student majoring in East Asian Studies as well as International and Global Studies. They have been taking Mandarin for more than five years; they discovered their love for learning the language in high school while living in Tianjin, China. Kara’s philosophy on studying languages is: “No matter what field you plan to be in, knowing another language can only benefit you.” As a WLC Fellow, Kara is managing the Instagram and Facebook accounts. Follow these accounts to get regular posts that will highlight various aspects of language learning, share stories connected to language learning, and learn about students studying languages at Brandeis and faculty teaching them! Kara wants to express how grateful they are for the opportunity to help inspire other students at Brandeis about languages, and they hope they can make a difference in the language learning community.

For news from the Division of Humanities, check out the Humanities and Social Sciences section of Brandeis NOW.

For inquiries regarding this website, or to submit an event or a news item, please email Katie Dickinson.