Upcoming and Past Events

The Russian Studies Program is screening the film "Broken Ties," a portrayal of families divided by the current war in Ukraine, on Thursday, October 6. The next day, you will have the opportunity to speak with the film's creator, Andrei Loshak, over Zoom. Please see the separate page for these events (link located in the sidebar) in order to register to attend. 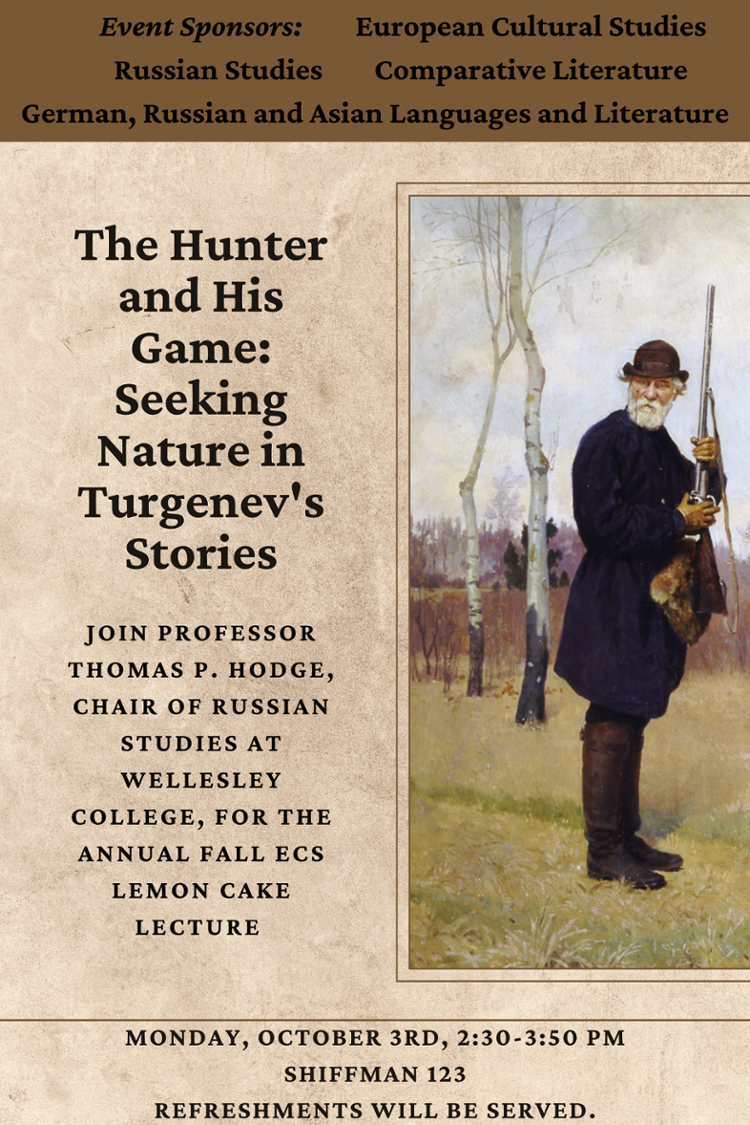 The Hunter and His Game: Seeking Nature in Turgenev's Stories

On Monday, September 19th, from 6:30-9:00pm, the Russian Studies Program hosted a screening of "Tango with Putin" aka "F@ck This Job," followed by a conversation with Natalya Sindeeva, the founder of independent channel "Rain TV" (now banned in Russia), and Vera Krichevskaya, the film's director.

Russian Teas will be taking place on Thursdays at 6pm during the Fall 2022 semester (with the exception of November 16, which is a Wednesday). As usual, each Русский чай will have a theme, and they will take place in Shiffman 121.

March 8th: You can stop by the table for International Women's Day to learn about the holiday and to celebrate women in your life. You can also participate in a fundraiser to support Ukrainian refugees by buying a sunflower hair pin. Later in the day, there will be a lesson on the Russian alphabet with the goal to teach someone who doesn't know Cyrillic letters how to read and write anti-war posters. Please bring your non-Cyrillic-writing friends! Russian and Ukrainian candy will be offered.
March 9th: The first event is the ECS Chocolate Cake Lecture on Tolstoy's "War and Peace." Although already planned in advance of current events, it will be relevant to the ongoing situation.
Later in the day, you can join us to make your own Cheburashka. Cheburashka is a symbol of friendship and brotherly love. You will have an opportunity to make your own Cheburashka by felting (a simple craft that is accessible to anyone). You can also make hearts or sunflowers using the same process. We have yellow and blue (colors of the Ukrainian flag) for hearts, flowers, and other objects, in addition to brown felt for Cheburashka. If you would like to donate your Cheburashka and/or hearts & flowers to the fundraiser, we'd be very grateful, but you can also keep them for yourselves. May these Cheburashkas bring you peace and comfort!
March 10th: This is an opportunity to learn about the western perspective on the Euro-Maidan revolution of 2014 which set in motion a chain of events that led to the war in eastern Ukraine and the annexation of Crimea. After watching a documentary "Winter on Fire" (98 minutes), you will have an opportunity to ask questions. Professors Steven Wilson (Politics) and Irina Dubinina (Russian Studies) will be contributing to the conversation. Russian and Ukrainian candy will be offered.
March 11th: Our second fundraiser with home-made cakes, bliny, and other Ukrainian/Russian dishes. Please stop by and bring your friends to help raise more money for the cause!
March 12th: Borsch is a staple for Ukrainians and Russians alike; it is also prominently featured in Polish and Eastern European Jewish cuisines. You will have an opportunity to cook this hearty soup (both meat and vegetarian options) on your own.

IN ENGLISH AND RUSSIAN

Make Your Own Cheburashka

Craft your very own Cheburashka, a beloved Russian/Soviet cartoon character. You keep whatever version of Cheburashka you make!

Pelmeni are small meat dumplings that are boiled. They are the Russian cousins of the Chinese dumplings and Italian ravioli. We will also make vegetarian/vegan version called vareniki, which in English are called pierogi. You will eat whatever you make! :-)

An Evening with Vera Pavlova: A Multi-Media Performance of Poetry and Tchaikovsky's Music

Vera Pavlova presents A Multi-Media Performance of Poetry and Tchaikovsky's Music. She will perform her work, "The Children's Album", set to the music by Tchaikovsky.

Chekhov, Stanislavsky and the Moscow Art Theatre: Against the Backdrop of the Century
Featuring Anatoly Smeliansky, Russian theatre writer, scholar, and critic and head of the Moscow Art

I Am Global Week Language Lunch

"A Replacement Life": A Reading and Conversation with Boris Fishman
Moderated by Professor ChaeRan Freeze

Presented by the Brandeis Russian Studies Program and Eurochannel.

September 24: My Dad is Baryshnikov
October 1: Another Year
October 8: The Admirer
October 15: Thirst
October 22: Jolly Fellows
October 29: The Admirer
Check out the feature in The Brandeis Hoot!

"The Limits of the Allowable: How to Feel the Borders of Freedom Under Totalitarianism"
Featuring Dmitry Bykov

"Fame and Fortune: On Writing a New Life of Tchaikovsky"

Featuring Philip Ross Bullock, Professor of Russian Literature and Music at the University of Oxford and a Fellow of Wadham College

Russian Club at the Global Bazaar

"The Other Stories in Anna Karenina: A Translator's Perspective"