Martin A. Fisher School of Physics 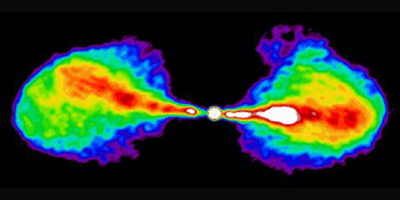 The Brandeis Radio Astronomy Group consists of Professors John Wardle and David Roberts (emeritus). We conduct research in extragalactic astrophysics and cosmology at wavelengths covering the entire electromagnetic spectrum, but especially at radio wavelengths. We are particularly interested in cores of "active galaxies" or "blazars" - powerful radio galaxies, quasars, BL Lacertae objects, and Seyfert galaxies. Making use of the Very Long Baseline Array (VLBA) of the National Radio Astronomy Observatory, the international Very Long Baseline Interferometry (VLBI) Network, and the VLBI Space Observatory Programme (VSOP), we study the angular structure and polarization of extragalactic radio sources in detail at resolutions ranging from arcminutes down to milliarcseconds, corresponding to physical scales from thousands of light-years down to a few light-years.

Our group pioneered the techniques of making linear polarization images at milliarcsecond resolution using VLBI. Recently, we have extended our techniques to measure the circularly polarized signals that originate from compact radio sources. These experiments are revealing for the first time the magnetic field structure in these compact objects (where apparent motions in excess of the speed of light are often observed), and the nature of the plasma surrounding the supermassive black holes thought to exist at the center of these sources.

Professor Roberts is leading an extensive study of X-Shaped Radio Galaxies using both undergraduates and international collaborators. These exhibit unusual extended radio structures that may represent galaxy mergers with pairs of supermassive black holes at their centers.

Professor Wardle is a member of the Event Horizon Telescope Collaboration, an Earth-sized array of radio telescopes, which recently succeeding in imaging the “shadow” of the supermassive black hole at the center of the nearby galaxy M87 in the Virgo cluster. Other targets include the massive black hole known as Sagittarius A* at the center of our own Milky Way Galaxy, and several quasars and active galactic nuclei.

The antennae of the Event Horizon Telescope