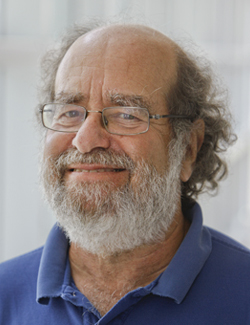 Many phenomena in living systems involve periodic changes. In recent years, oscillating chemical reactions have blossomed from a curiosity studied by an obscure group of Russians to a major area of scientific research. We study these systems both experimentally and theoretically, from several points of view. We have achieved the first successful design of a new chemical oscillator. We have used our systematic design algorithm to expand the family of chemical oscillators from two accidentally discovered reactions to dozens of deliberately constructed systems. We continue to search for new types of oscillators while probing, both experimentally and computationally, the mechanisms of those that have already been discovered.

Chemical oscillators can be "tweaked" to give a variety of related phenomena, many with suggestive connections to biological systems. We study spatial pattern formation, in which an initially homogeneous medium spontaneously gives rise to concentric rings, or spiral patterns resembling those seen in embryonic development or the aggregation of slime molds, and chemical chaos, in which concentrations oscillate deterministically, but in an aperiodic and apparently irreproducible fashion that depends sensitively on the initial conditions. We investigate Turing structures, patterns that arise from the interaction of reaction and diffusion, which have been suggested as a mechanism of spatial pattern formation in phenomena ranging from biological morphogenesis to geological stratification.

We are interested in the phenomena that can occur when two or more oscillators are coupled together, either physically, i.e., by diffusion or an electrical connection, or chemically, by having two oscillators share a common chemical species. Such systems can give rise to surprising phenomena, such as "oscillator death," the cessation of oscillation in two coupled oscillating systems, or the converse, "rhythmogenesis," in which coupling two systems at steady state causes them to start oscillating. Coupled chemical oscillators provide simple models for networks of oscillatory neurons. We have begun to apply some of the insights gained in our studies of coupled chemical oscillators to the modeling of small neural networks.  More recently, we have begun to study chemomechanical transduction, a phenomenon in which changes in chemical composition are converted into motion, e.g., in the periodic shrinking and swelling of a gel composed of a polymer that contains the catalyst for an oscillatory reaction immersed in a solution containing the reactants of the chemical oscillator.