Jayeol received a B.S. degree in Mathematics and Computer Science & Physics from Emory University. The topic of his undergraduate thesis was on semantic parsing, but Jayeol has also explored other research areas such as evolutionary theory, medical imaging and differential expression analysis. At Brandeis, he hopes to further strengthen his technical and mathematical background while cultivating an interdisciplinary perspective to think about artificial general intelligence.

Solomon received a B.A. in mathematics from Bard College with a focus on Mathematical Logic and Universal Algebra. At Brandeis, he researches computer vision and video processing, and he is particularly interested in the relationship between image semantics and motion in video.

Eben received his BA in linguistics and MS in computational linguistics from Brandeis. Before starting as a PhD student in the computer science department, he performed clinical NLP research at McLean Hospital, Harvard Medical School under the supervision of Prof. Mei Hall. He is advised by Prof. James Pustejovsky and is currently working in the Brandeis Lab for Linguistics and Computation on problems related to multimodal representations of language, semi-supervised learning, and human-computer interaction.

Varun received his B.Sc. in Mathematics and Statistics from St. Joseph's College, Bangalore. Prior to coming to Brandeis, he was working in data science for a sales consultancy startup. His interests lie in the intersection of computer vision and natural language processing

Peizhao is a Ph.D. student in the Michtom School of Computer Science at Brandeis University, supervised by Prof. Hongfu Liu. Before that, he received his bachelor degree in Electronic and Information Engineering from Beihang University. His research interests include machine learning, representation learning, and relevant applications.

Guirong received her B.A and M.S degree in Electrical, Electronics and Communication Engineering from Shanghai Jiao Tong University. During her graduate studies and research, she learned more about artificial intelligence (AI) and worked on several projects using neural networks, where she found her passion. Her interest in AI makes her want to further pursue a doctoral degree at Brandeis in AI related areas, such as natural language processing.

Growing up, we have been learning and then losing various skills, but not all. One notable exception is the communication skill, challenged and developed time after time as we meet new people and start conversation with them. Modeling that skill from Computational Linguistics perspective is Alex’s overarching research agenda. Specifically, he is interested in dialog systems, computational models of discourse, dynamic meaning representations, and conversational corpus annotation. The real-life application he aims for is a socialbot that provides language learners with personalized interactions to improve their communicative competence. He is co-advised by Prof. Sophia Malamud and Prof. Nianwen Bert Xue. 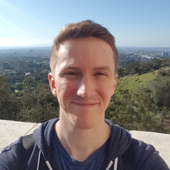 Xiaodong received a B.S. degree in Computer Science from Dalian University of Technology. His research focuses on Brain-Computer Interface (BCI) with non-invasive  electroencephalogram(EEG) data. He tried both clinical and nonclinical approaches with BCI data for activity recognition and disease detection etc. Personalization is one of the core findings because each individual's brain signals are so unique that the current BCI systems perform much better with personalized pattern recognition (A2E’18, FIE’18). Most of the time he is using deep learning frameworks (TensorFlow and Pytorch) on our own GPU-enhanced Linux servers or on cloud services such as Google Cloud and AWS.

Jonne is a Ph.D. student in Computer Science at Brandeis, where he is working on problems in low-resource and multilingual NLP with Professor Constantine Lignos. Before coming to Brandeis, Jonne received his A.B. in Statistics from Harvard College in 2017. In his free time, Jonne is an avid language learner, and is currently working towards fluency in French, his 6th language.

Ella received a B.A. in Computer Science from Clark University. Her research interests include accessibility, computer-supported collaboration and cooperation, cognitive engineering, and the general field of human-computer interaction.

Yifei Wang
PhD Candidate
Yifei received her B.S. degree in Pure and Applied Mathematics from Tsinghua University. Her undergraduate thesis was the analysis of sparse spectral clustering methods based on graph theory and optimization methods. Through several research experiences spanning from basic clustering models to more complex deep learning frameworks, she found her great passion in machine learning. She hopes to cultivate her academic and innovation ability as a Ph.D. student at Brandeis.

Thomas is a Ph.D. Candidate in Computer Science working with Professor Jordan Pollack and the Brandeis DEMO Lab. His research interests include deep reinforcement learning, search and planning, the theory of games, evolutionary computation, and artificial life.

Chi earned his Master's degree in data science at Worcester Polytechnic Institute. After working at two high-tech companies, Amazon and Ctrip, areas such as big data management, machine learning and AI became extremel interesting to him. He hopes to dig into these areas for research and make some contributions in the next few years. This has led him to Brandeis University, with its excellent reputation in science, where he is pursing his Ph.D. in computer science.